Bur Oak Blight is a fungal disease that started to appear in Midwestern states in the 1990s. At first we thought it was connected with a common Tubakia leaf spot fungus, but Tom Harrington of Iowa State University discovered that it is caused by a previously unidentified strain of Tubakia, which he calls Tubakia iowensis. For Northern Iowa and Southern Minnesota, Bur Oak Blight is proving to be a severe and potentially economic problem. 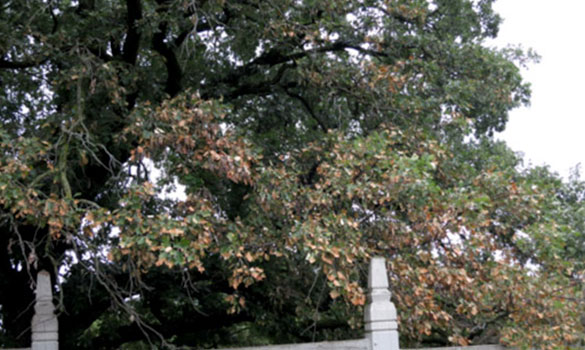 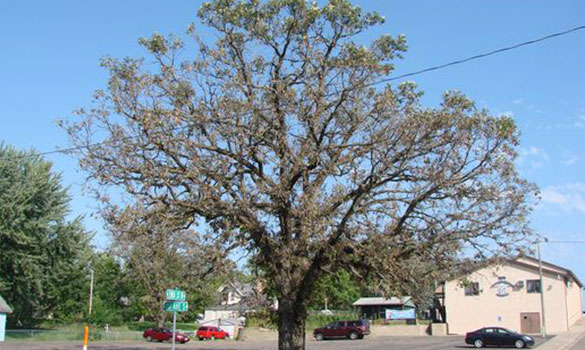 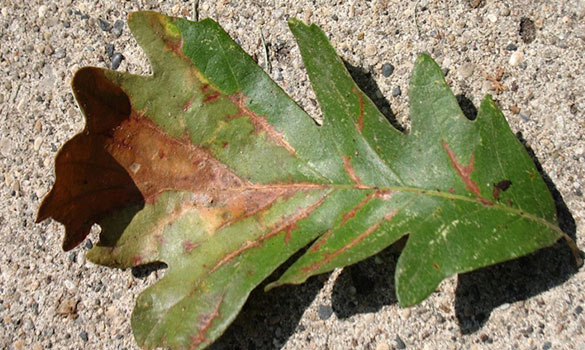 The fungus that causes BOB thrives during especially weeks of Spring, infecting the leaves. The fungal growth is slow, taking a few months to develop each season. Affected Bur Oaks may leaf out fully in the Spring, but the leaves begin to die in late July to early August. Most of the leaves fall prematurely, each year getting worse, and the dead leaves that hang on through the winter carry the spores that will pass the infection back to the tree in the following Spring. While scientists believe that Bur Oak Blight itself is not fatal to the tree, several years of early leaf loss can result in limb death. Excessive dead wood in any tree can lead to heartwood decay and may welccome secondary pest invasion like Two-lined Chestnut Borer, an insect that can kill a weakened oak.

The good news is that Bur Oak Blight is treatable using trunk injections of propiconazole. Fungicide can cause a phyto-toxic response in Bur Oaks, so we combine the treatment with a soil injected fertilizer to provide the tree with nutrients to help it through the shock of treatment. A proper pest management program and pruning maintenance are the best things you can do for your Bur Oaks in North Iowa.

You guys are amazing! What a well-oiled machine. All that teamwork and in the rain to boot. That is dedication. Big storm damage mess cleared up in 2 hours. And to think our job was only the first on your list that day. Thanks so much.

The Whole Job Was a Success

The whole job was a success to me, from the removing of the trees, the stumps, filling in with dirt, planting of the new tree, trimming the other tree to the cleanup. You did an amazing job, and in record time. You have a hard working crew.

Rarely at a loss for words I am struggling to express the depth of my gratitude to Kevin for taking immediate action to safely remove a tree at our house.

Totally pleased with your work at our Clear Lake property! Thank you, thank you!